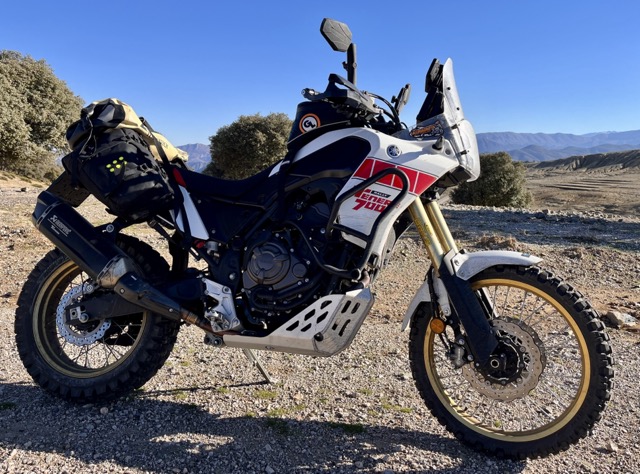 According to the internet it was -7°C outside, -7!! It was Sunday morning and the plan was to leave early and head south as quickly as possible. But reading the weather forecast did not inspire me to get going. So, I checked my packed bags, repacked one of them and removed some stuff that I really didn’t need and tidied others. Eventually I left around lunch time. It wasn’t as cold and once I was on my way wasn’t too bad. Like a lot of things, the apprehension is the worse bit, once you get started you realise it’s not as bad as you thought it would be. It was still -2°C though!

With my heated jacket turned up to 80% it was a pretty uneventful journey. I headed towards Paris then around the Périphérique south. The only excitement was when trying to navigate around a busy Paris interchange in the dark. I took a wrong turning and it was just at that moment my satnav decided to switch itself off, leaving me pondering which of the many lanes I needed to take. It’s not the first time it’s done that, it seems to know when the most inconvenient time is to either crash, freeze or switch off entirely. I have now raised a support ticket in an attempt to fix the issue.

At least the weather was improving as I headed south. There was some very light drizzle and the temperature did reach 5°C at one point.

I had booked a room in a hotel somewhere south of Paris. It was comfortable and clean though pretty average. By morning the rain had stopped and it was looking like it was going to be a dry day. I spent the day chasing the edge of a bank of dark clouds. I could see brighter, lighter sky in front of me but could never seem to reach it. Maybe the dark clouds where also heading south. The temperature continued to climb, reaching 16°C at one point before I skirted the Massif Central at about 1000m and it started dropping. Never dropped below about 8°C though.

Everything was going really well and I was making good progress. Then the wind happened. It started around lunch time, at least it wasn’t a gusty wind, but it was very strong and made passing high-sided trucks eventful.

I arrived at a hotel in Millau in the dark, so haven’t seen the Millau Viaduct yet. That will have to wait until morning.

In daylight I could see the bridge off in the distance. I stayed at a great hotel in Millau called the Hericlea. I was able to park my bike right outside the room so carrying the luggage in was no problem. I discovered in the morning, that I had left my ignition key in the bike all night so I guess the area was quite safe too. 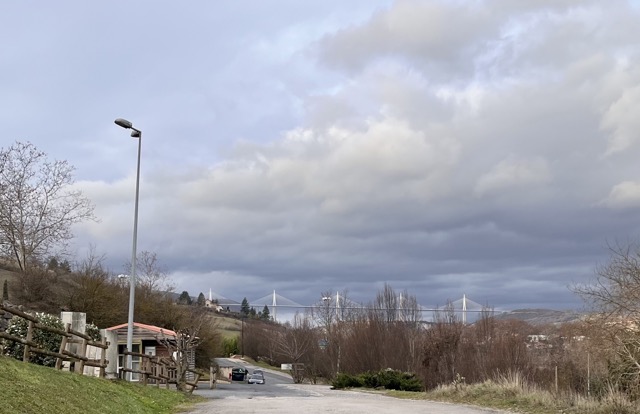 There are some great roads around Millau, which would have been more enjoyable if the wind was not still trying to blow me into the armco barrier. I did see some eagles though, as I was leaving the town. One even flew alongside me next to the road above a steep drop off.

After lunch I hit my first traffic jam. It seemed as if every truck in France was trying to cross the border into Spain at Perpignan. I don’t mind filtering through cars, but filtering through 3 lanes of articulated lorries for 5km is a new fun game. I clipped my mirror more than once and had to weave across lanes to navigate the lorry maze. I was eventually able to leave the autoroute and take a minor road, which was relatively free of traffic, towards Girona. 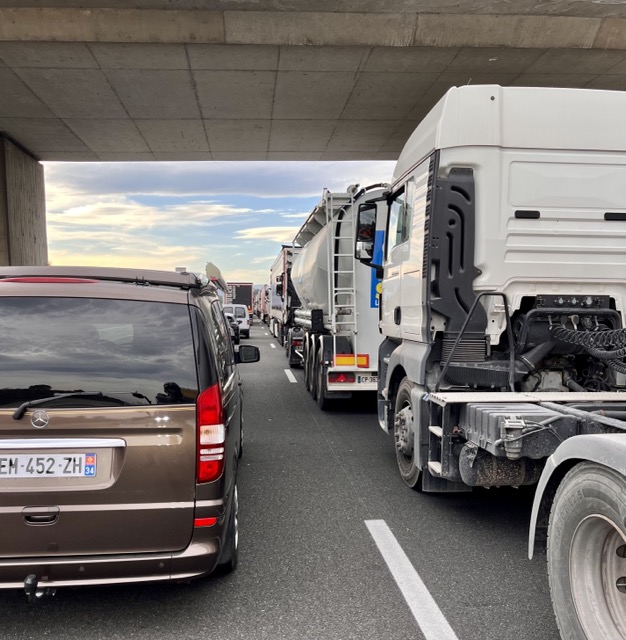 Not far to go now, just more motorway miles. I stayed the night in a place called Deltebre on the Spanish coast. The hotel was called the Delta and sat in the middle of a really big wetlands area. I saw all sorts of large and small birds in the surroundings and there were pictures of flamingoes all over the hotel. But I guess they only visit in the Summer.

I was to meet Chris and Gareth in La Manga but having arrived at the address suggested by my maps app it didn’t look promising. There were no house numbers or any identifying marks so I headed back to the top of the road to sit in a cage and plan my next move. I wasn’t there very long when Chris and Gareth, who coincidently happened to be passing by, saw my bike and stopped.

As it happened the address we should have been at was several kilometres away.